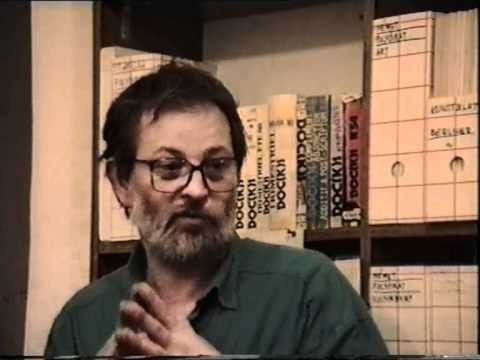 word:
György Galántai (born June 17, 1941) is a Hungarian neo-avant-garde and fluxus artist, organizer of the events of the Chapel Studio in Balatonboglár which run from 1970 to 1973 and founder of the Artpool Art Research Center Budapest. During the Communist Era of Hungary, he organized illegal, underground avant-garde exhibitions and therefore he was considered to be a "dangerous element" by the Party for spreading western propaganda, and was monitored by secret police, who opened the file "Painter" solely documenting his activity.[1] From the late seventies he started an intense correspondence with fellow artist all over the world, joining into the network of mail art even despite the Iron Curtain limited his access for information. In 1979 he created an archive for these correspondences and other documents which he collected on Hungarian neo-avantgarde movements and initiated Artpool which became the largest archive of new mediums such as fluxus, visual poetry, artists' book, mail art, artistamp etc. in Central Europe.
Between 1970 and 1973, Galántai organized and ran the "Chapel Studio" of avant-garde art held all summer in the chapel in Balatonboglár.[2] In all, there were some 35 exhibitions, concerts, poetry recitals, theatrical performances, and film showings were held over these four years, featuring the best of Hungary's (and then considered politically undesirable) avant-garde artists, and guest artists from abroad.
In 1971, he started working on the problem of signs and their meanings. For a detailed account of the rest of his career, see the biography link below.
en.wikipedia.org, 27.4.2019
-
György Galántai was born in Bikacs, Hungary in 1941. From 1963 to 1967 he studied painting at the College of Fine Arts in Budapest. From 1970 on he organised semi-legal exhibitions, actions and happenings in the chapel of Balatonboglár, which he had rented from the Catholic Church until it was closed down by the police. Galántai experimented with graphic art, visual poetics and sound poetry. In 1978 he send out the call “Please send me information about your activity” to the international Mail Art Network. With the received mail he founded the Artpool archive that – besides its focus on the new and alternative mediums in contemporary arts from the 1960s on – became the most important centre for documentation and research on Mail Art in Middeleastern Europe. After 1989 the archive was opened to the public, and since 1992 it has been receiving financial support from the city of Budapest. Galántai did various Mail Art projects, i.e. an hommage to Ray Johnson, performances (1980 together with Italian Mail Artist Cavellini). In 1983 he published the first issue of the Artpool Letters, and in 1988/89 he received a fellowship of the DAAD in West Berlin.
For some exhibitions he rebuilded works by George Maciunas, like his deformed ping-pong table with Fluxus table tennis rackets.
mailartists.wordpress.com, 10.10.2019