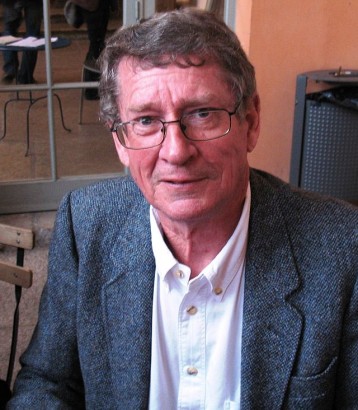 word:
André Philippus Brink, OIS, (born 29 May 1935) is a South African novelist. He writes in both Afrikaans and English and is a Professor of English at the University of Cape Town.
In the 1960s he, Ingrid Jonker and Breyten Breytenbach were key figures in the significant Afrikaans literary movement known as Die Sestigers ("The Sixty-ers"). These writers sought to use Afrikaans as a language to speak against the apartheid government, and also to bring into Afrikaans literature the influence of contemporary English and French trends.
His novel Kennis van die aand (1973) was the first Afrikaans book to be banned by the South African government.[1] André Brink translated Kennis van die aand into English and published it abroad as Looking on Darkness. This was his first self-translation.[2] Since then André Brink writes his works simultaneously in English and Afrikaans.[3]
While Brink's early novels were especially concerned with apartheid, his more recent work engages the new range issues posed by life in a democratic South Africa.
en.wikipedia.org, 2014/12