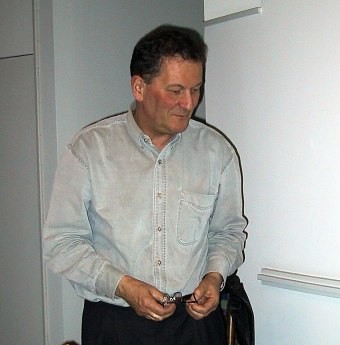 word:
Petr Kotik was born in Prague, the Czech Republic, in 1942. Studied flute with František Čech at the Prague Conservatory and Academy of Music, and with Hans Reznicek at the Music Academy in Vienna, Austria. Studied composition privately in Prague with Jan Rychlík and Vladimír Šrámek, and at the Vienna Music Academy with Karl Schieske, Hans Jelinek, and Frederich Cerha. In 1961, he founded and directed the ensemble Musica viva pragensis, and in 1966, the QUaX Ensemble, both based in Prague. In 1969, Kotik came to the United States upon the invitation from Lejaren Hiller and Lucas Foss to join the Center of the Creative and Performing Arts at the State University of New York at Buffalo. In January, 1970, Kotik founded the S.E.M. Ensemble. In 1983 Kotik relocated to New York City where he continues to direct the S.E.M. Ensemble. From 1971 to 1977, Kotik taught flute at the State University of New York at Buffalo. He taught composition at York University in Toronto in 1975-76, and at the State University in Buffalo in 1976- 77. In 1992, Kotik founded the Orchestra of the S.E.M. Ensemble, which became recognized as one of the foremost large-scale new music groups. Since its debut in Carnegie Hall in 1992, the SEM Orchestra has been performing major concerts and tours at Alice Tully Hall at Lincoln Center (1993,1996,1998, 2000, 2002), Zankel Hall at Carnegie Hall (2005), Konzerthaus Berlin (1993), the 1995 and 1999 Prague Spring festivals, Oji Hall in Tokyo (1997), Spanish Hall at Prague Castle and Kunstmuseum Bonn (1997). Kotik is the founder and artistic director of the biennial summer institute and festival Ostrava Days, in Ostrava, Czech Republic, which was realized in 2001, 2003 and 2005.
zdroj - www.ocnmh.cz