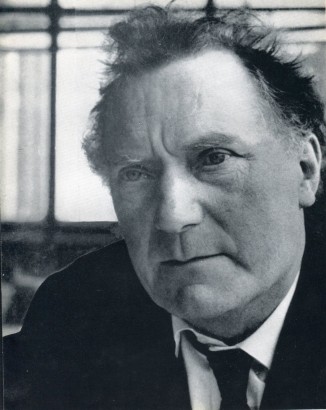 notes:
NK - 2017/12 ne
-
Henri-Georges Adam was born in Paris on January 14, 1904 to a father from Picardy and mother from Saint-Malo. During his childhood he spent his summers in Saint-Malo and Saint-Servan. In 1918, after attending a watchmaking school, he started working the studio of his father, a jeweler-goldsmith in the Marais district of Paris, where he learned to carve and later to engrave. Then in 1925 he took evening classes at a drawing school in Montparnasse and after a stint at the École des Beaux-Arts in 1926 became a drawing professor of the Ville de Paris. Beginning in 1928 he began to make satirical sketches and political caricatures. "His spirit of cynical and apocalyptic derision is of the same nature as that of Rouault illustrating Miserere de Guerre. Anarchist, pacifist, antimilitarist, Adam reverses all taboos. He does not care about the myths of his country, of his family or his religion," notes Waldemar George (Adam, 1968, p.30).

In 1934 Adam got involved with engraving, etching, the use of the burin and the environment of the surrealists, André Breton, Louis Aragon, Paul Éluard. He made his first exhibit in 1934, with a preface by Jean Cassou in 1936 after which he began his violently impressionistic engravings entitled, Désastres de la guerre, in response to the Spanish Civil War. In 1936 he joined the Association of Revolutionary Writers and Artists, where he met painters Maurice Estrève, Alfred Manessier, Edouard Pignon, and Arpad Szenes. He took part, along with Picasso, Matisse, Rouault, Dufy, Fernand Léger, Chagall, Chaim Soutine, Zadkine, Roger Bissière and Edouard Pignon in the exhibition Quatorze Juillet by Romain Rolland at the Theatre de l'Alhambra, in which Picasso painted the curtain scene.

Mobilized in 1939 and taken prisoner, Adam was assigned as the auxiliary nurse at the hospital Saint-Jacques de Besançon, where he made many drawings of surgeons, soldiers and the wounded. He was eventually released at the end of 1940. He tackled sculpting in 1942, and in October 1943 he, along with Gaston Diehl, Leon Gischia, Jean Le Moal, Manessier, Pignon, Gustave Singier, became one of the fifteen founders of the Salon du Mai. That same year he created the sets and costumes, masks and two four meter-tall statues for Jean-Paul Sartre's Les Mouches which Charles Dullin assembled. He also carved Le Gisant, a tribute to the French Resistance and martyrs, which would be exhibited in the Salon de la Libération. Adam became friends with Picasso, who lent him his studio in the rue des Grands-Augustins where he worked more at ease until 1950. Between 1948 and 1949, at his Boisgeloup estate, near Gisors, he realized among other works, Le Grand Nu conserved by the Musée national d'art moderne.

In 1949 Adam presented a comprehensive exhibition of his works, frequently of women's sleek forms, at the gallery Aimé Maeght and in 1952 his copper engravings based on the year's theme of the Month, went on display in the bookstore-gallery La Hune. From 1950 to 1955, he was a professor of design at Antony, a college town which today bears his name. During 1950, he instructed many painters and sculptors (including Raphy).

From 1955 the first retrospective of his work was organized at the Stedelijk Museum, Amsterdam In 1956 and 1957, Adam developed one of his most famous suites of engravings, Dalles, Sable et Eau showing scenes of the sea, sand and granite of Penmarc'h, and a series of sculptures named Mutationes marines. He made new tapestries for the French Embassy in Washington in 1957, Meridien for the Palace of UNESCO in 1958, and Galaxie for Air France in New York in 1961.
After a project for Monument du Prisonnier Politique Inconnu in 1951, his Le Signal was erected in front of the Musée du Havre in 1961, the first of his monumental sculptures. The number of Adam's sculptures multiplied: Le Cygne blanc for the Lycée Charlemagne à Vicennes (1962), exposition of Obélisque oblique (1962) at the French Pavilion at the Exposition de Montréal, a set of sculptures and tapestries for l'église de Moutier in Switzerland, for which Manessier created the windows (1963-1967), Mur , a 22 meter-long wall, and La Feuille for the lycée de Chantilly (1965), Trois pointes effilées for the college-city of La Flèche (1965), a monument for Vichy (1960-1966), La Grande étrave for the house of culture of Thonon (1966), Fontaine for the city of Bihorel-les-Rou (1966), Le Minotaure for the college-city of Segré (1967), L'Oiseau de granit and La Grande Table de conférence for the lycée technique de Saint-Brieuc (1967).

In 1959 Adam was appointed professor of engraving at the Ecole Nationale Superieure de Beaux-Arts de Paris and later head professor of the workshop of monumental sculpture. He installed his own workshop and presses in La Ville du Bois, near Montlhéry while many of his exhibitions were presented in museums in France and Europe. In 1961 Adam developed a series of sculptures entitled Cryptogrammes. A retrospective of Adam's work was presented in 1966 at the Musée national d'art moderne in Paris with a foreword by Bernard Dorival. Three of his sculptures and the tapestry Penmarc'h were presented the following year in Montreal.

In the middle of a creative whirlwind, Adam died from a heart attack on August 27, 1967 at La Clarté near Perros-Guirec, and lies in the cemetery of Mont-Saint-Michel, the theme of his last tapestry.
zdroj - http://en.wikipedia.org